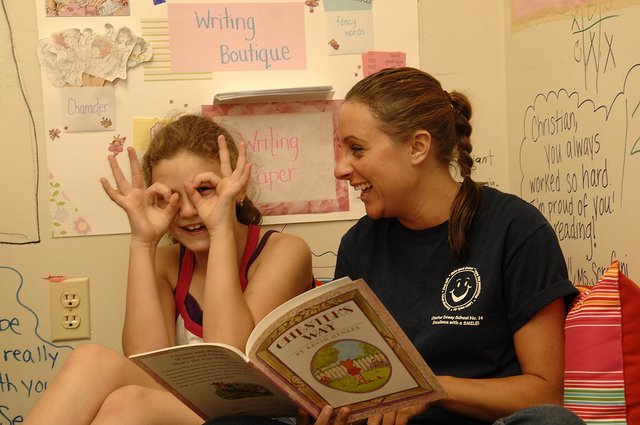 Literacy rates for children in the US are now at a critically low level. This is alarming for any country but especially so in a First World developed, capitalist, industrial country like the US. Low literacy rates are unsettling because we are rapidly moving away from the industrial age into the information age.

Many people believe that we entered the information age at the advent of the Internet. However, whether or not we are there already, by the time today’s children become adults, the industrial age will be a footnote in history.

Let’s face it, literacy development has always been important, but in the future when robots, automation, and machines will be replacing most manual labor and manufacturing jobs, those who are functionally illiterate will not be able to earn a living.

This is not hype, but a rather obvious trend. Already, Elon Musk has built the Gigafactory, cars are being printed out, and hotels are being staffed by robots

It’s Worse than You Think

According to DoSomething.org, “As of 2011, America was the only free-market OECD (Organization for Economic Cooperation and Development) country where the current generation was less educated than the previous one.”

The website also says that one in four American children grow up not learning how to read, that 2/3rds of children who can’t read well by the end of 4th grade either end up in jail or rely on welfare, and that children who don’t have reading proficiency by the 3rd grade are four times more likely to drop out of school.

The Dumbing Down of America

If you want your child to be well-read, you have a major challenge on your hands. You are fighting a strong streak of cultural anti-intellectualism.

Promoting the value of reading books is difficult in a culture that celebrates sports, media soundbites, social media interactions, obsession with emails and texting.

Children who like to read, think, and reflect are referred to by their peers as “geeks,” “dorks,” or “nerds.” For the uninitiated, a geek is someone intelligent; a dork is someone who has social ineptitude, presumably because they spent so much time studying; and a nerd is someone who is obsessed with a particular intellectual pursuit.

Focusing on raising a child who loves to read will have to be a joint effort by parents and teachers to overcome the secret cultural bias your child will face.

Why You Should Encourage Your Child to Read

Here are 7 reasons why you, as a parent, should spend time with your child teaching them how to love reading:

1. You will develop a stronger bond with your child as you teach them how to read and look at the world with eyes of curiosity and wonder.

2. Your child will develop academic excellence and acquire the knowledge and skills they will need to flourish in the information age.

3. As your child’s mastery of language progressively increases, your child will learn to clearly communicate their ideas. They will be able to express themselves through the written and spoken word.

4. Your child will develop a mind that loves to learn. Currently, the rate of human knowledge is doubling at an increasingly rapid rate. Those who don’t love learning will begin to fall behind.

5. Your child will learn to think about complex issues in more depth and sidestep much of the sophistry currently rampant and promoted by commercial, political, and religious interests. They will be able to stay rational in a world intent on deceiving them for profit. The world is becoming increasingly complex, and it will take more intelligence to see through clever manipulations in the future.

6. Your child will learn to focus and concentrate and complete tasks. Reading trains the mind to follow a train of thoughts while digital distractions lower the human attention span.

7. You will be preparing your child to contribute to social progress. All progress comes from individuals who see farther than their peers because they have taken the time to observe and understand how the world works.

Learning how to read can make all the difference in the world. It can mean the difference between a life of futility, poverty and struggle and a life of purpose, passion, and prosperity. Your child will learn to avoid unhappy jobs and create a wonderful life.

“OMG You Can Do That?” How to Cite & Reference A Paper Using Word
IELTS vs TOEFL: Which test to take? Which is easier?